I am extremely hesitant to weigh in on the controversy stirred up by Amazon’s recent release of The Lord of the Rings: The Rings of Power (hereafter referred to as “ROP”). It’s a powder keg situation in which no one is actually listening to one another, but rather responding in knee-jerk fashion with their own calcified opinions and agendas. More voices are unlikely to bring any good to this toxic discourse.

My problem is, I care too damn much about fantasy storytelling—of which The Lord of the Rings (“LOTR”) looms large. Along with science fiction, fantasy is my favorite genre. I consume it across media types with a particular enthusiasm. So, I’m going to make the grave mistake of putting my opinion out there. I’m nearly certain I will come to regret it.

First, to state the crux of the issue, ROP casted people of color in roles that had previously gone exclusively to white people in other Tolkien adaptations, such as Peter Jackson’s LOTR trilogy. The full-throated complaints have varied sources, ranging from overt racism to arguments over purity regarding what author J.R.R. Tolkien did or did not intend.

I don’t want to be associated with these racists. I don’t agree with them, full stop. But my position does align with theirs, albeit for completely different reasons. Even if I can successfully separate my conclusion from theirs, I’m still potentially making myself an enemy to those for whom issues of diversity trump all others. If you continue reading this, you will find that my opinion on this matter does not put diversity first. Diversity matters to me, but not at the expense of good storytelling.

If your priorities differ, perhaps this article is not for you.

Diversity in our modern world

Humanity lives in a global world that is growing smaller by the day. More and more, we’re discovering just how interconnected we all are. What each and every one of us does every day ripples outward in incredibly complex and nuanced ways. The manner in which we live, the work we do, the things we buy—all the choices that make up our days—none of it happens in isolation.

The nearly 8 billion people on this planet are physically and virtually connected in ways that are unparalleled in human history. Planes, trains, and automobiles have made physical distance a trivial barrier to conquer. You and I can arrive on the other side of this little blue marble in 1 – 2 days, tops (including layovers). With the internet, traversing space is often unnecessary: practically instant communication is possible from anywhere to anywhere else.

The peoples of the world are talking, traveling, and migrating as never before. Against this backdrop, diversity is critical. We must share Spaceship Earth with everyone; it’s becoming increasingly necessary for our survival to do so. We have to learn to live to together, to understand our differences—and if we truly want to succeed, embrace them.

This is the reality of the modern world we inhabit. It should be noted that it is an anomaly in the 200,000 year history of homo sapiens. This moment and its circumstances are extremely unusual. They have arisen in the blink of an eye when compared to the time span of our species. But for better or worse, this is our world.

Art as a reflection of our world

Art imitates life. Life also imitates art. From there, I deliberately avoid the nauseous discussion about which imitated which first and simply highlight the original point: our art is often a reflection of our world.

Art is topical. LOTR (the novels) would not exist as they are today had it not been for World War I, in which Tolkien served as a lieutenant. To those who complain that the so-called “timeless” writings of Tolkien are being besmirched by modern mores, I suggest taking this information to heart. Nothing is timeless, least of all art. Everything is inextricably rooted in a time and a place.

It is undeniable that our time and place—our modern mores, not Tolkien’s—have been injected into the casting of ROP. It’s right there in Amazon Studios’ inclusion policy:

Each film or series with a creative team of three or more people in above-the-line roles (Directors, Writers, Producers) should ideally include a minimum 30% women and 30% members of an underrepresented racial/ethnic group.

I think we can all agree that Tolkien (who died in 1973) did not write his novels with this guidance in mind.

This is company policy. It applies to ROP and every other Amazon original series. This policy is a reflection of our modern world, in which diversity is expected—and, more and more, demanded.

If I didn’t make this clear enough in the previous section, let me put it plainly: I support diversity efforts. I have no problem with diverse casting in and of itself. It’s a good thing. Everyone should be represented in the media that we all consume. However, I think it is worth questioning whether a billion dollar company’s inclusion policy is best serving the interests of the story.

Believability is an important facet in storytelling, even in fiction. It can be hard to become invested in a story if we don’t believe it’s something that could really happen. But some people question the need for believability in a genre such as fantasy, where characters and events are completely disconnected from our reality.

Take the Balrog from The Fellowship of the Ring. This is a fantastical beast that bears no resemblance to anything in our world. Where’d it come from? What does it eat? Does it procreate? If you’re a true geek, you can read more about Balrogs than you ever wanted to know. But for the rest of us, we just have to accept this monster’s existence at face value and not ask too many questions. 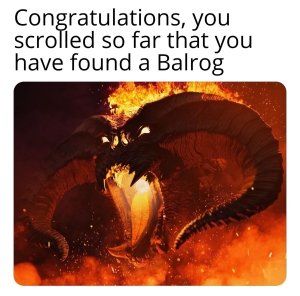 The thing to keep in mind, though, is that we don’t need to personally connect with the Balrog. It exists solely for our main characters to fight, and hopefully, overcome. At the least, their encounter with the beast will create good drama.

The diverse modern world vs. the homogeneity of the past

Ethnic diversity is not exclusively a modern phenomenon. But looking at what we know about the history of our species, it’s a process that’s playing out and accelerating more today than at any other time. It’s only been made possible because of our exceedingly large population (numbers never before reached) and the technology that now connects us (never before invented). These are both extraordinarily recent developments.

For the vast majority of human history, we lived in small, isolated communities. These communities were homogeneous monocultures. Our ancient ancestors didn’t have planes, trains, and automobiles. They largely didn’t go anywhere. Migration was slow, if it happened at all.

Compare that to the European colonization of the Americas. Between 1836 to 1914, over 30 million Europeans migrated to the United States. There weren’t even 30 million humans alive in the world prior to 5,000 years ago.

Here’s what I’m driving at: fantasy worlds such as ROP bear more resemblance to our ancient past than they do our modern world.

A question then: is ethnic diversity in ROP’s small, pre-technology communities realistic? I personally don’t think so.

This might seem like a trivial point, but the small details matter; they add up. When I see a person of color as an Elf, I wonder how that happened. Is there a community of black Elves somewhere, and this one guy walked off and immigrated to another community of white Elves? Did the creator, Eru Ilúvatar, create the Elves and then decide—for reasons of diversity—one of you shall be different from the others?

If the writers aren’t going to explain his origins, I don’t have any evidence to believe this casting is realistic. I question it, and my questions take me right out of the story. The illusion dissipates.

This is a similar complaint to one I have for a concurrent controversy going on with HBO’s House of the Dragon, which features a black Targaryen man. How did that happen? We’re talking about the incest family here. You mean to tell me they just let a black man marry into the incest family? For me, there’s a disconnect between what we know about these characters and these little details that are unexplained. It isn’t believable. This casting decision serves company policy, not the story.

Amazon’s Wheel of Time adaptation, however, doesn’t suffer from this fault. Diversity fits right into the context of the story. In this world, human civilization had peaked in the distant past and is now a lesser version of its former glory. The world had broken—its peoples scattered. Imagine what would happen if our modern world collapsed and borders disappeared. Migrations of people would be immense. That’s the historical backdrop of Wheel of Time. Ethnic diversity makes sense.

A common retort I’ve been reading recently would go something along the lines of, “you can believe in a Balrog, but not a black man as an Elf?” To put it plainly, yes. The Elf and the Balrog are not held to the same standard. The Balrog is merely a plot device. He’s there to trigger an inciting incident in the story, and as another reminder that this is, in fact, a completely different world than our own. The Elf, however, is a main character that we need to believe in.

Here’s an idea: what about making all the Elves black? I could support that. That would make sense. That would be believable in the context of the history that Tolkien so intricately wove.

I’m not naïve, of course: I understand that that decision would create its own outrage. Racists would come out of the woodwork complaining that, “a white man can’t even be an Elf anymore.” Let’s say all Dwarves were white. Inevitably, some people of color would complain, “a black person can’t be a Dwarf?”

I’m sure people will accuse me of xenophobia—that I believe races shouldn’t mingle. That’s not true. I love our modern day melting pot. I want to see it continue to grow. In my life of travel, I have frequently found myself in other countries for extended periods of time where I feel more comfortable in their cultures than I do in my own.

What I want in my storytelling is not a reflection of what I want to see happen in the real world. What I want is to experience a good story that I can believe in.

Our modern moral compass is guided by the notion that anyone can be whatever they want. That’s the higher ideal, of which ethnic diversity is merely a facet. If the goal of Amazon Studios and the makers of ROP is for the most number of viewers to see their identities and desires reflected in the experiences of the most number of characters, then the show is succeeding. Maybe that’s the case here, and there’s certainly nothing wrong with it if that’s what viewers want.

That’s not what I want. I don’t want Tolkien’s world to resemble our own, and that’s my general opinion regarding most fantasy properties. There will be exceptions—I’ve already highlighted Wheel of Time—but what I most often seek in the fantasy genre is pure imagination untethered from the problems and mundanity of everyday life. I want to lose myself in another world entirely—a world that’s believable.

This diversity mandate from Amazon executives achieves only one thing: it enforces modern mores across their entire slate of IP, even in fantasy worlds such as ROP that (ought to) bear little resemblance to our own.

That’s my position. I’ll likely be damned for it.