Alexander: The A to B Cut – A Fan Edit

In Film & Television
Scroll this
LikeFacebookTweetLinkedInEmail

Epic | adjective ep•ic \’e-pik\
2 a : extending beyond the usual or ordinary especially in size or scope

After the critical shellacking of the 2004 epic Alexander, I imagine director Oliver Stone wringing his hands, thinking, “They didn’t like it because they didn’t understand it. I’ll spell out every detail to a ‘T’. Then they’ll like it.”

And with that, all subtlety went out the window—and all respect for the audience’s intelligence with it. Four director-approved edits later, and it’s more of a mess than ever.

The truth is, I think the critics harpooned this film not because it was incomprehensible, but because writing bad reviews is fun. It was one of those films that the critics loved to hate. Once their peers started in with the scathing criticism, they all piled on. A game of witty and vitriolic one-upmanship ensued.

It was too easy to pass over its many merits and focus solely on the Irish accents, Colin Farrell’s hair, the soap opera level of melodrama, and the subtle but not-so-subtle homosexual undertones (remember this was 2004). It’s not a perfect film by any stretch. But to quote Anthony Hopkin’s Ptolemy, “What failure? [Alexander’s] failure towered over other man’s successes.” And so I believe it to be with this film—I would take its failures over other film’s successes any day.

That’s why I created this fan edit—Alexander: The A to B Cut. This is my best attempt to rework a flawed film. To do so, I hearken back to the Theatrical Cut’s chronology, interweave much of the Final Cut’s additional material, and excise anything that A) Insults audience intelligence, and B) Prevents this film from being the sweeping, ever-moving-forward epic it so desperately wants to be. 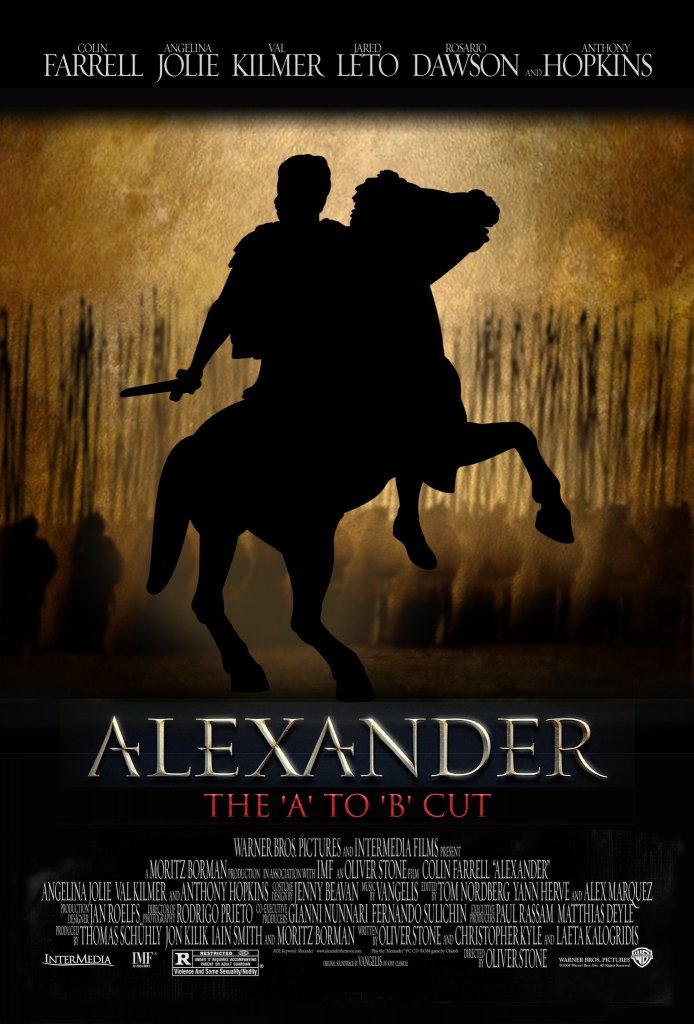 With all due respect, Mr. Stone, you fucked up when you made this film a tossed salad. I can only speculate why you did it. The pessimist in me surmises you hold your audience in contempt. Perhaps you think that without opening the film on your signature battle scene at Gaugamela you’ve lost your low attention span viewers. Or, perhaps it’s less audience contempt and more a lack of confidence in the material that makes up Alexander’s upbringing. I can’t help you with either.

Beyond Gaugamela, perhaps you strayed from the chronology because you felt it lacked good flow. If you truly believe that, you should have scripted a better film. There are large jumps in time, most notably between Philip’s murder and Gaugamela. You should have shot more, and you didn’t. It’s too late now.

What I truly suspect is that the broken chronology serves to keep certain characters in the film throughout the duration—such as Olympias. Did you want to sustain a strong female presence in this largely male-dominated cast to broaden the film’s appeal? I can understand that from a marketing perspective, but brass tacks: who are you trying to win over 12 years later? Alexander is a boy’s club, like so many epics that have gone before it. Just own that already. Do you know what’s even more of a boy’s club? Lawrence of Arabia. You’re in good company.

This is the worst part about the broken chronology: we’re never free from the past. We’re never permitted to truly stride forward with Alexander off the edge of the map. Olympias is always there, even though Alexander never sees her again after Philip’s murder.

Maybe—just maybe—this is a purposeful creative decision on Stone’s part. He wanted to show that Alexander was always shackled to his past, and particularly his mother. But going about it this way is like a sledgehammer over the head. It’s heavy-handed to the extreme.

This idea comes across subtly but clearly in my edit, where the last 2.5 hours are blissfully Olympias-free. It’s obvious exactly how much and in what ways his mother fucked with his head, because we already had an hour of it. It’s obvious he’s running away from her. The nagging voice of her letter writing is an insult to our intelligence. It brings nothing new to the table. It does nothing but drag us backward when an epic should never stop moving forward.

In keeping with the “ever forward” concept, I cut little snippets of rehashed footage all over the place. If it occurred earlier in the film and Stone replayed it to remind us, or point out something he thinks we overlooked, I excised it without a second thought. Only near (and on) his deathbed, when Alexander had pretty much lost his mind, do I allow early movie footage to replay. It makes sense that his life is flashing before his eyes in this context.

Stone’s notable exception to the Theatrical Cut’s chronology is the flashback to Philip’s murder. It was never intended to play where I relocated it, and it’s still problematic to say the least. The scene directly preceding it has Philip banishing Alexander. To see them riding together, on friendly terms, 30 seconds later is… not ideal. But what can be done? This was one of those jumps in time that I can only wish Stone had padded. As it is, I truncated that preceding scene short of the banishment. It serves, instead, as rather a bad fight that we the viewers just have to accept they made up off-screen.

Then there are the title cards: I cut out pretty much every title card from the film. I did add one title at the very beginning of the story to set the stage: “Pella, Macedonia 351 B.C.” That seemed appropriate. Tell the audience where and when we are, and then bugger off. What more does the viewer need? Do we really need a title card that says “India”? I know we’re in India because I’ve been paying attention. Does the audience really need a title card that says “Macedonian Center”? What is this, a lesson on military strategy? I thought I was watching a Hollywood film with an Irishman in a bad wig. Stop trying to teach me. This is not the medium for it.

Lastly, you’ll find that there’s now an Overture and Entre’act. This is an epic, and the epics of yesteryear had them. Call me a traditionalist; I suppose I am. The music that plays, I took from the soundtrack.

Read on for the techno-babble.

I cut this version together from two sources: a Theatrical Cut (TC) HD DVD and a Final Cut (FC) Blu-ray. I should add I’ve never seen the Ultimate Cut. I’ve read that it’s shorter, and so for my purposes here, I doubt it would have been useful.

The TC HD DVD was, in my opinion, the superior source of the two. The VC-1 video encode was not as good as the FC’s AVC—and there was a yellow tinge to the highlights, which I removed (and Stone removed in the FC)—but it was obvious in a direct A/B comparison that the TC was more finely detailed and had a more natural color palette. In addition, it was less matted. The FC boasts a 2:40:1 aspect ratio, while the TC is around 2:34:1, but the FC isn’t wider—it’s more matted. We’ve lost picture off the top and bottom of the frame.

I had to decide on a common aspect ratio, and in the end I chose to conform the FC to the TC. I cropped the FC slightly to the left and right to fill the picture out to a 2:34:1 frame. It seemed a shame to crop the FC even more than it already had been, but I didn’t want to matte my better source. For this reason, I used the TC as much as possible in my edit, but forgoing the task during radically recut scenes.

After a series of visually lossless conversions, I created Apple ProRes 422 files for both sources to edit with. My final master is similarly exported.

Both edits have gone through no small amount of color correction, which in the end I had to scale back a bit due to my relative inexperience in the art. The FC is just too hot—the reds too punchy, color saturation verging on excessive. I much prefer the steelier look of the TC. I conformed the FC’s color palette to that of the TC where necessary (and possible), but changes were made to both. It was usually with one of the following aims in mind: 1) Neutral blacks, 2) Neutral whites, and 3) Reasonable color saturation.

I downmixed the 5.1 audio to stereo. It’s not that I couldn’t do a 5.1 mix—I just have no 5.1 equipment with which to do quality control on it. So why bother?

I’m a video professional, and it was important to me to create a professional edit. I wanted polish more than I wanted to include every second of footage. When a splice didn’t work, I’d keep trimming until it did. Where I couldn’t color correct without introducing distracting video noise, I didn’t color correct.

I found this whole process challenging. Achieving precise audio sync was maddening. Doing initial conversions on PC, and then getting those files in a Mac-happy format for editing—without further loss of quality—was not easy. Color correcting material of varying quality… it seemed hardly worth it at times.

To do this sort of work, as a perfectionist, could drive a person crazy. I just had to settle on “good enough” at some point. I hope you find it to be of better quality than most fan edits.